In the first years of the North Wales Hospital staff frequently complained they were unable to find suitable recreation and amusement for patients. Just how did staff keep hundreds of patients from different backgrounds entertained, and how did this entertainment change throughout the hospitals lifetime?

When the hospital was originally built the idea of patient entertainment had not been considered. It was only when the first patients began to inhabit the hospital that the omission was realised. In 1849 the Medical Officer requested that a number of outdoor entertainments for patients be created. He requested that a portion of the land be allocated and developed into a bowling green. With the assistance of patient labour a bowling green, skittle ground, and flower garden for private patients were opened in 1851. Patients also went on guided walks into the surrounding countryside, this practice continued and the sight of large numbers of patients walking through the area would have been a familiar site to local people in the late 19th century.

Outdoor recreation remained an important part of life in the hospital throughout its history. The hospital had its own staff and patient cricket and football teams, and male patients were admitted to local league games free of charge. The summer months also provided opportunities for other outdoor entertainments such as an annual sports day, garden fêtes and flower shows. 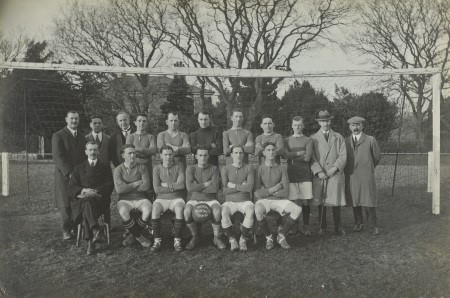 The hospital football team during the 1919-1920 season. Copyright Helsby of Denbigh.

When the weather was less than favourable patients had to seek indoor entertainment. Following the success of the first annual Christmas ball a weekly dance was introduced, which proved popular with patients. In 1902 a new dining hall and recreation room was added to the hospital, now in addition to dances patients also enjoyed concerts, choirs and drama productions. Patients also had the chance to play various indoor games such as whist, bingo, and chess.

As technologies developed so too did the entertainment opportunities available to patients. In 1914 two gramophones and a cinematograph were purchased. The Medical Superintendent commented in the 1915 annual report that “nineteen cinema shows have taken place during the winter. No other form of entertainment has created such an interest amongst the inmates”. The cinematograph certainly did prove very popular amongst patients, and the hospital continued to have twice weekly cinema shows. By 1954 each ward had its own radio and television, which would have been a luxury for those patients who would not have had a television at home.

Patients also had leisure opportunities outside of the hospital grounds. In the 1950s as well as picnics to nearby beaches in Rhyl and Pensarn, the hospital was involved in a patient holiday exchange programme with other hospitals in Wales and England. During their visit the transferred patients would enjoy a range of activities such as games, films, and day trips around the local area. An itinerary for patients and staff from Central Hospital in Warwick who visited the North Wales Hospital in 1961, shows that activities included watching films, walks to Denbigh castle, and square dancing. Day trips included a visit to Chester Races, and a trip to Snowdonia.