Commemorating the centenary of such a cataclysmic conflict as the First World War is not an easy task. We wanted to produce something that would be different and lasting, that could be a focus of remembrance and at the same time a resource to help people discover the part their family members played in the conflict. But how to do it? 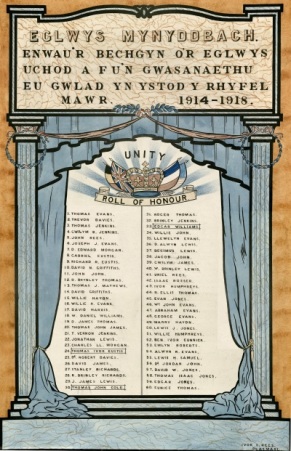 Over the years, we have received a number of rolls of honour. Sometimes they were given to us with the words “You probably won’t want this, but…,” followed by a certain amount of surprise when we did. Many of them have come from churches and chapels that have closed down, and a combination of years of damp and neglect have taken their toll on highly decorative items that once took pride of place.

There was a subtle change in the way war service was commemorated. While the war was on, the emphasis was very much on appreciation of those who were serving. This obviously meant the servicemen, but often included women serving as nurses or munitions workers. Many organisations began a roll of honour: for some, this was a poster, usually designed by a calligrapher, featuring a list of names of those who were away fighting. Equally it could be printed and distributed as a booklet. Other communities responded in a more practical way by setting up committees and raising funds for comforts or commemorative items for the men at the front.

After the war was over and the men came home, the nation debated how best to deal with what had happened. The focus shifted to those who did not come home: over the decade that followed the war, many communities raised tablets, crosses and obelisks, or built halls and chapels, to remember their dead and to provide a centre-point for the annual act of remembrance. Time went by, and the rolls of honour that had taken pride of place during the war were relegated to lesser rooms, attics and stores, and the old soldiers whose names they listed faded away one by one. 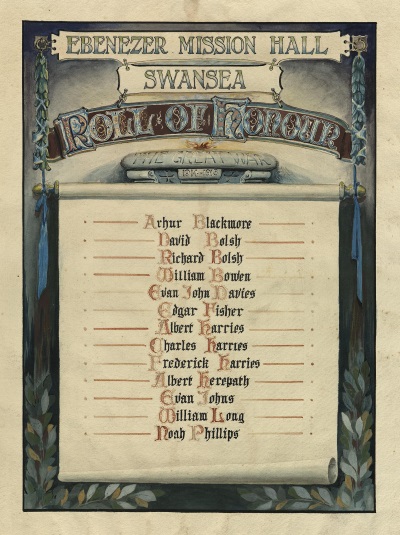 Institutions such as the Commonwealth War Graves Commission work hard to collate the information about the men who died. The ones who came home can present more difficulties: they returned to their homes and their jobs, often preferring not to talk about the places they had been and the things they had witnessed. Where does the genealogist go to find out about them? Our commemoration was designed to help.

We digitised all the war memorials and rolls of honour held in West Glamorgan Archives, then extracted all the names and made an index. This has been uploaded onto our website as a digital roll of honour. Each name on the index (there are 4295 of them) has a link to the memorial on which they appear, with information about where it was displayed and how it came to be made. 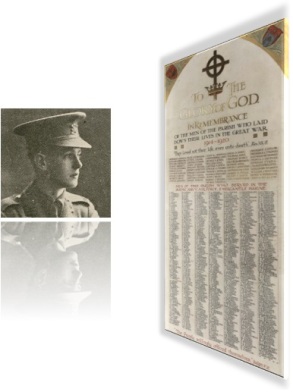 The resource can be seen on our website, www.swansea.gov.uk/westglamorganarchives. Our hope is that this will be a lasting memorial to the men and women from our area who took part in the war, and that it will prove to be a useful resource long after this year ’s special commemorations are over.