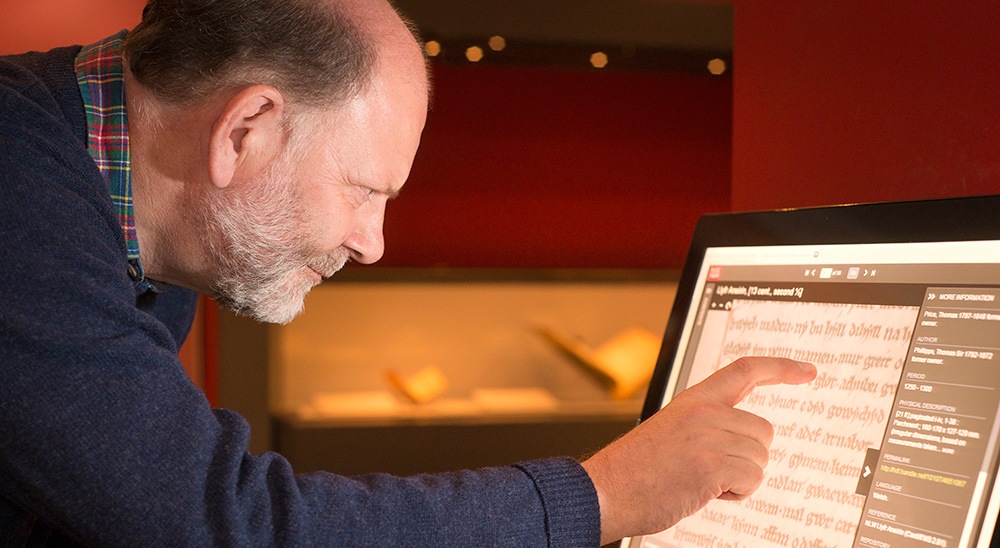 With busy lives it can be hard to find the time to think of, let alone actually get out and take part in, volunteering. However, if the right opportunity arises and you are able to say ‘yes’ it can offer a host of benefits – reducing stress, finding friends and learning something new.

When he retired from teaching over a year ago, Colin knew that he wanted to spend some of his new-found spare time volunteering at the National Library of Wales. Since  joining their team of volunteers he has had the chance to be involved in a number of projects and met lots of different people, now Colin tells us about a few of those projects and the things he has learned – from dealing with tea stains to resisting Nazi invasion.

“Consistently, throughout my time at the National Library, I have worked on the Ordnance Survey Maps of England project, which has been a long-term project to put into a database thousands of OS maps acquired by the Library in various states of preservation – from pristine to barely hanging together. Many of them were used by the surveyors to work on the next editions and show their annotations of how things had changed in the landscape and the process of producing the maps – even down to spilling their tea over them.

“By the 1930s many of the maps (which showed part of the country’s defence capability and military preparedness) were stamped SECRET – I’ve seen subsequently that these were used by the SAS in various areas to arrange arms caches and other tactics for resisting possible Nazi invasion.”

In addition to this long-term project, Colin has also been involved in digitisation  projects:

“The two I have been involved in so far are The Cynefin Project and transcribing The Welsh Book of Remembrance. The first geo-references the tithe maps of Wales in 1840s, documenting the patterns of landholding and tenancy throughout the country. The second project will create a searchable database of all  soldiers of Welsh origin, or who served in a Welsh regiment, that lost their lives during the Great War. It will be a lasting legacy for those who died in the War, as well as being an important resource for future historians of that conflict.

“Last week I started on a new project (which could turn out to be the most ambitious and absorbing use of volunteers yet!), to list and write commentaries on the hundreds of photographs associated with railways that the Library has throughout its collection. The aim is to create a central database that will make the life of anyone trying to find images of railways, locomotives or railway workers in the Library much easier, but it can often (even on the experience of the first images) involve a good spell of research to identify those images and put them into context.  This task alone should keep me out of mischief for the coming months!!”

For more information on The National Library of Wales’ volunteering scheme, go to: