Using one of the gems housed at the West Glamorgan Archive Service, historians have the chance to travel back in time to see how Swansea used to be 150 years ago. Staff at the archives have digitised a very detailed map of the town and made it available as an interactive resource CD to help to bring the past to life. 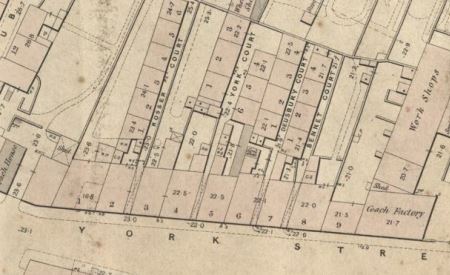 Swansea Local Board of Health was formed in 1850 to regulate sanitation in the rapidly-growing town. To help with planning, they appointed London surveyor Samuel Gant to map the town. His work took two years, but when he finally revealed his map two years later, the result was worth the wait.

From downpipes to doghouses, stables to sundials and pumps to piggeries, it shows the streets of Swansea in a way that is quite unique. The houses are all numbered, even down to the smallest slum dwellings. Larger public buildings, such as the Guildhall and parish church, even include a seating plan. Never had Swansea been surveyed in such a depth of detail, and it gives us a glimpse of how life would have been and enables us to explore some forgotten nooks and crannies of the town.

Bennet Court for example sounds quite grand, but studying the map shows us that it was anything but: through a narrow opening off York Street was a row of four tiny one-up-one-down houses, the front doors opening onto a narrow alleyway where two people could barely pass without bumping shoulders. As for sanitation, all four houses shared a single toilet. Twenty yards away was all the clatter and bustle of a coachmaker’s workshop, while behind the far end was the peaceful garden of a gentleman’s town house. Today people go up the escalator of the Vue Cinema unaware that they have just passed through the roof-line of the old court.

The resource CD is available from the Archives for £14.95. It will work with an internet browser to let you navigate around the map. You can zoom in to see each property in detail. Extra features include a street index to help you find streets and buildings named on the map, photographs and engravings of some of the places shown on the map that are not there anymore, and a transcript of George Thomas Clark’s street-by-street survey of Swansea made in 1849. There is also a full account of how the map came to be made and what it tells us about Victorian Swansea.